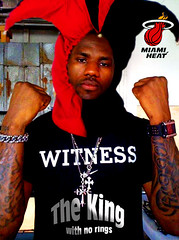 I’m a Cleveland Fan.  I moved to South Florida a few months ago but I still love my hometown.

But I am disappointed that LeBron left Cleveland for Miami. I’m a selfish Clevelander. I want a championship.

LeBron was the hope Cleveland needed to win a championship.

Why are Clevelanders mad? Because we deserve a championship. I never thought LeBron would leave Cleveland.

The way he announced his departure was horrible. You don’t go on national TV and rip the carpet from underneath the fans in Cleveland. The businesses will suffer in downtown Cleveland but they will eventually recover.

I still have faith in the Cavs. Dan Gilbert has put his heart and soul into Cleveland. He’ll make the team better.

Will I follow LeBron’s career?  Yes. I will catch a few Heat games like everyone else as my curiosity permits. You have to root for the hometown guy. But I will always be a Cavs fan.

Green Lasers: What they Look Like When Pointed at Aircraft

How do you change your caller ID to another number?
Ohio Random Check Suspension – How I Beat It!!
Do I Miss Cleveland?